1984 by George Orwell follows Winston Smith as he seeks to fight back, through knowledge and free thought, against the totalitarian Party that rules Oceania and his entire life.

The novel takes place in the year 1984 in which England has been transformed under a totalitarian superstate known as Oceania. 1984 follows Winston Smith, a mid-level member of the Party. The Party demands the allegiance and adoration of its citizens. But, Winston Smith has escaped the brainwashing that seems to have taken over everyone else’s mind. At the center of the Party is a mysterious figurehead who goes by the name of Big Brother.

Winston’s burgeoning interest in the past and his hatred of the Party and its cruel, murderous, and destructive policies lead him to seek out the revolution.

It is for 1984 that George Orwell is best-known. The events of his life led him down a path that allowed him to see the world through a very clear lens. His belief system was well fostered and served to inspire him to write 1984 and Animal Farm, as well as other works of fiction and non-fiction that seek to promote democratic socialism over any form of totalitarianism.

As a young man, Orwell lived in poverty in London and Paris in order to learn about the darkest parts of society. Unlike most men and women with strongly held beliefs, he stood up for them. When he traveled to Spain to write about the Spanish Civil War he ended up joining a militia in order to fight against fascism and Franco. He was shot in the neck and charged with treason for his efforts.

Orwell was well aware of the dangers of totalitarianism and Soviet Communism and knew that the conditions he depicted in both novels could occur anywhere at any time. Today, the books are considered to be a reminder that democracy is not bulletproof. It is possible for our better-governing systems and better selves, to fail. 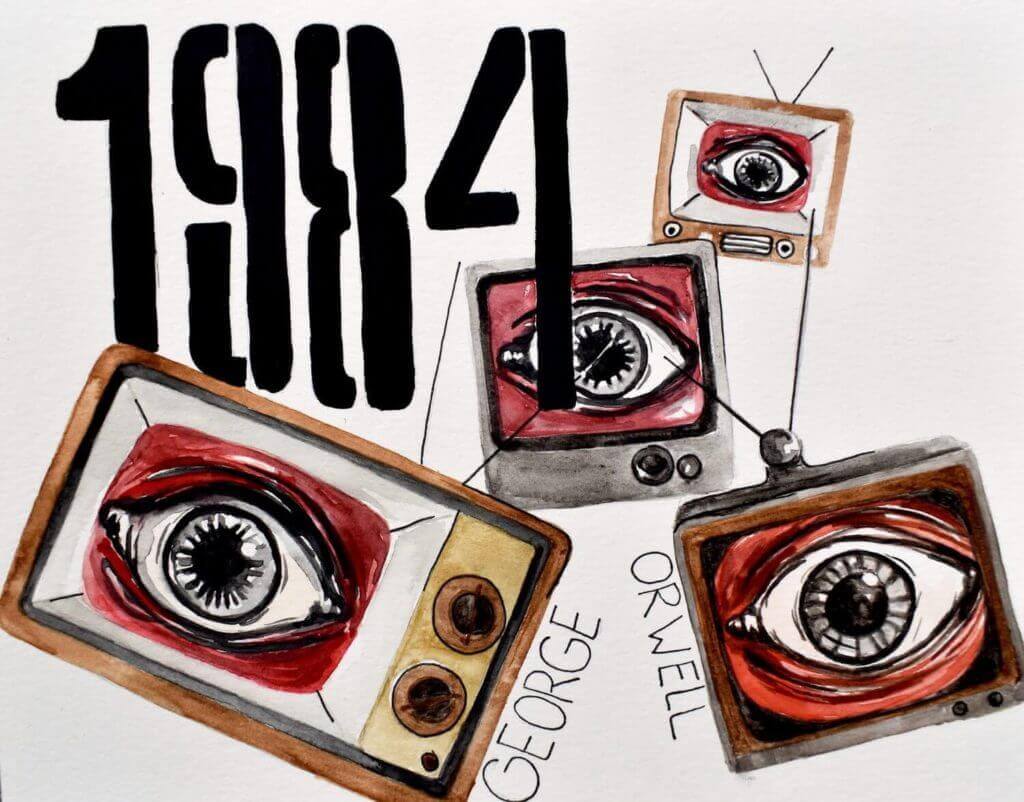 Artistic representation of 1984 by George OrwellBooks Related to 1984

When George Orwell wrote 1984 dystopian fiction was not the genre that it is today. At the time that he was writing 1984, there were several wonderful examples of this genre from which he could draw inspiration. Some of these include his mentor Aldous Huxley’s A Brave New World published in 1932, Yevgeny Zamyatin’s We published in 1924, and Jack London’s The Iron Heel. The latter is considered to be the earliest example of the genre, published in 1908.

Over the decades the genre would grow, becoming one of the most popular amongst readers and writers. Today, there are numerous contemporary examples of novels and short stories that have their origins in George Orwell’s masterpiece. These include books like The Handmaid’s Tale by Margaret Atwood, The Stand by Stephen King, The Power by Naomi Alderman, The Giver by Lois Lowry, and The Road by Cormac McCarthy.

The Lasting Impact of 1984Few books have had as long a lasting impact as 1984. When it was published in 1949 after the Second World War, the book seemed to be at its most relevant. But, the following decades proved, as the times are proving today, that 1984 is not falling out of the spotlight anytime soon. The novel has sold tens of millions of copies. It has been made into and inspired movies, tv shows, and plays. Orwell’s wider literary oeuvre has birthed other novels (such as those listed above) and inspired a generation of thinkers to always keep an eye on the past.

Today, as anti-democratic, pro-isolationist, and even fascist governments are taking power all over the world, many have turned to Orwell for his knowledge of these systems and the importance of fighting back against them. Totalitarianism is not a thing of the past and luckily we have 1984 as well as Orwell’s other novels and essays to remind us how possible it is to lose our democratic systems of governance.